I wanted to start mentally and physically preparing for my cross-country trip and for full time living (a.k.a., “full-timing”) in a space that’s under 200 square feet. Instead of waiting for the day my vintage Airstream would be ready to hit the road, I figured I could use my apartment’s existing space and start scaling down my domestic life in the meantime.

I got the idea to recreate the Airstream’s layout in my apartment from feedback I got a few years ago at Yestermorrow Design / Build School, when I presented a class project on Airstream design. Before doing any renovations, the faculty advisors had suggested using tape to mark out the floor plan in my work space (perhaps in a gutted trailer), and cardboard cutouts to make furniture templates that would give me an experience of the space at full scale. Since then, I’ve purchased my Airstream (which is relatively intact) and spent an afternoon taking measurements of the interior. I paid particular attention to the closets and storage compartments to have a better sense of what I can carry with me. 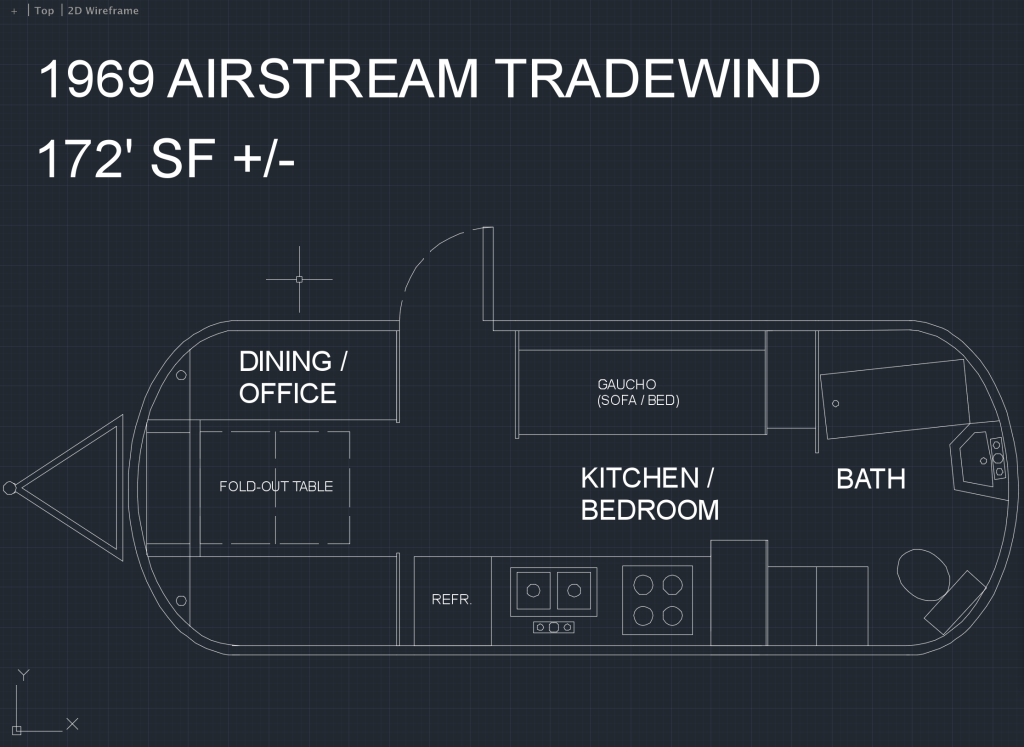 In my free time, I started learning more about people who are living simply in order to lessen environmental impact or achieve other personal goals, and it influenced my thinking. The books Little House on a Small Planet by Shay Salomon, Walden on Wheels by Ken Ilgunas, Vagabonding by Rolf Potts, and the documentary Maidentrip were particular favorites.

Like most people, I tend to spread my belongings out and acquire more “stuff” in relation to how much room I have. With this experiment, I wanted to see if creating some new spatial constraints that approximated living full time in an Airstream would help me to be more honest and disciplined about what’s essential in my life. So, on New Year’s Day this year, I moved some furniture and a few personal essentials around and came up with this layout:

It didn’t take very long to move things into place. When I stood back to look at my handiwork, I felt both excited and more comfortable to be starting the New Year in a configuration that closely resembled my dream. And sorting through my remaining belongings to put them into storage (which had lately seemed a rather endless task) in a single stroke became essentially, “everything that’s not in the bedroom, kitchen or bathroom.”

The drawing below (created with AutoCAD software) illustrates the full layout of my apartment and the difference in how much space I’m using now (down by about two-thirds), then compares it with the square footage of my ’69 Trade Wind: 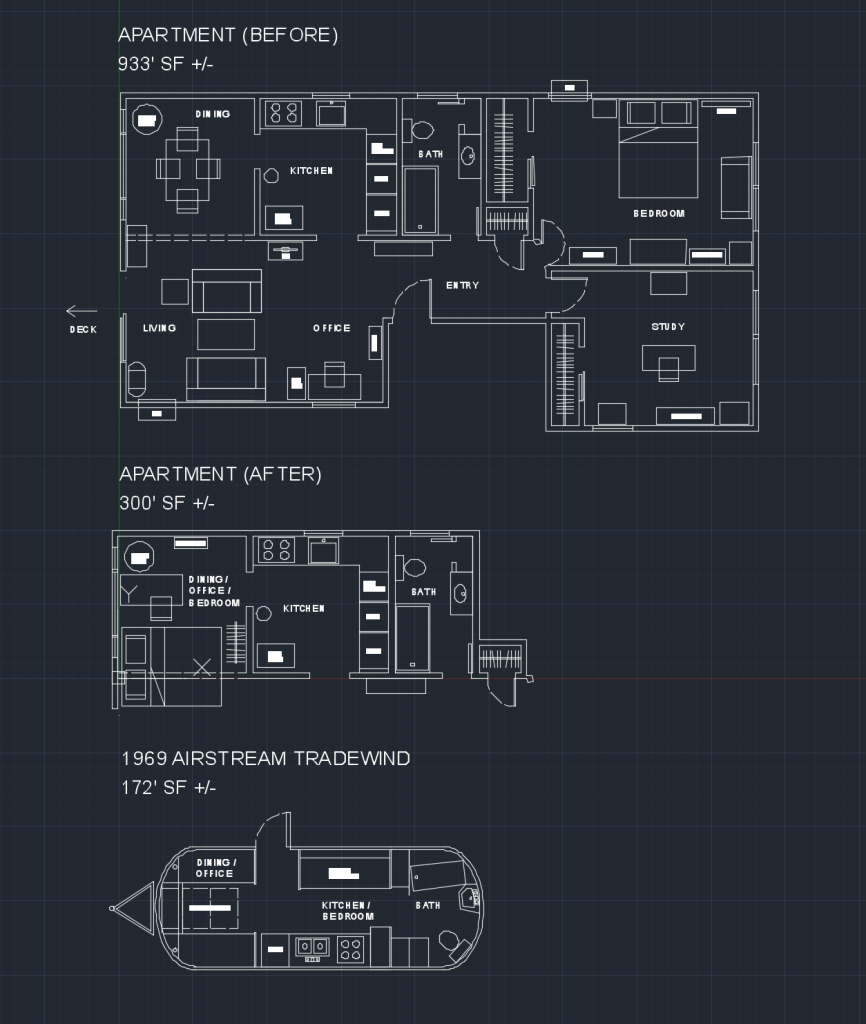 Here are some thoughts from the first few weeks of full-timing in my “edited” living space:

I still have many questions and a lot to learn about full-timing on the road, but my favorite thing about living this way so far is that it feels like I’m camping out at home every night! Over the next couple of months (and as the trailer renovation continues), I’ll clear out the remaining rooms in my apartment and will gradually increase the amount of time I spend in the remaining space I’ve allotted myself. Of course, things like the dishwasher and large refrigerator I have in my apartment won’t be in the Airstream, so over the next couple of months I’ll wash dishes by hand more and will have to practice using less space in the fridge at home. I’ll also set aside space in my living room to simulate the space I’ll have in the bed of my pickup truck.

Ultimately, I agree with the philosophy that, “luck favors the prepared.” But I also know that, no matter how I may try to simulate and troubleshoot, the future holds adventures that I would be foolish to try and to plan for. For now, it’s about de-materializing for its own sake, learning and having fun… I wouldn’t have it any other way!