I returned to North Carolina for a third time to help my family with a project, and was excited that by the end of my two week stay, my new Airstream cushions would finally be finished! I knew that before I made arrangements for their final pickup, I needed to touch base with the upholsterer to check on progress, review final pricing, and make a progress payment to help motivate his team to keep our schedule. I had already made an initial down payment that represented a little over a third of his estimate to get the ball rolling. Then, I delivered all of the materials to him in a timely fashion and made sure to confirm their arrival. The upholsterer then confirmed that by April 1st, my cushions would be finished.

So, I stopped by the shop three days before the deadline to take a look. Although I’d arrived a week earlier, this was the earliest they would accommodate a visit. The process had begun, with the materials roughly cut to size (using the original cushions as templates):

The L-shaped pieces that fit to the ends of the seats had already been covered with leather on one side (cloth matching the seats would be applied to the reverse): 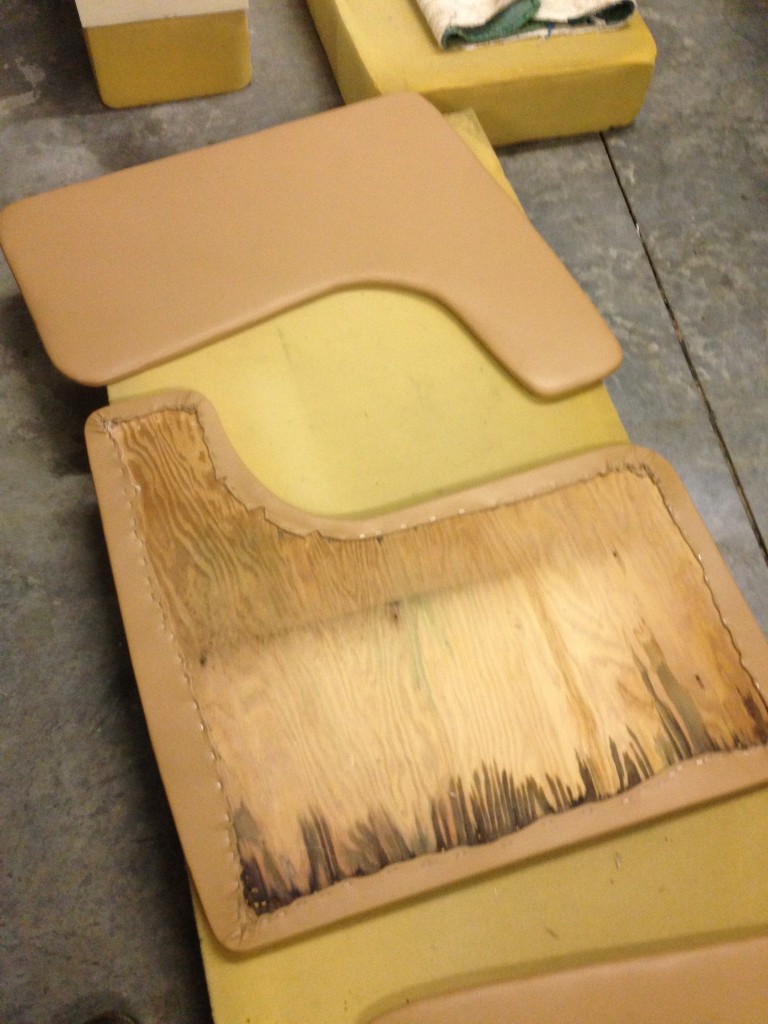 They had discovered during this process that we didn’t have enough material to make the Dinette cushions reversible (as I’d hoped, in order to prolong their life), and that the largest L-shaped end didn’t quite have enough cloth either unless they pieced in an extra 2″ strip at the very bottom that wouldn’t exactly match. Since this area wouldn’t be seen once installed, I approved the changes so that we could proceed. At this point I felt that the upholsterers were making decent progress, and were willing to meet the deadline, so I asked about final pricing (reminding him that I was a referred customer).

Unfortunately, here is where we came to a conflict. The upholsterer shifted on his feet a few times, looked off into the distance and seemed to be doing some calculations in his head. Months earlier, we had come to a $700 – $800 rough estimate, which he’d warned me at the time was not firm. But he’d also told me that the price wouldn’t be very much higher. These numbers were based on a discussion of the construction method. I’d also delivered the materials to him and reviewed them with him in person well in advance, and there was no mention of any additional factors that would affect price.

I imagined that he would come up with $1,000 as his revised price, and was shocked when he came up with $1,500! Double the price!!! He’d used the construction process and extra reinforcement sewing needed for the type of fabric we were using as his justification. We sat down in his office and I made the following proposal:

Taking his highest preliminary estimate of $800, I would meet him in the middle between $800 and $1,500, which is $1,150. I told him that since the construction method hadn’t essentially changed since we’d first negotiated and the additional work he was proposing to reinforce the cloth wasn’t mentioned to me when we reviewed the material in person, I felt that $1,150 was fair. He actually admitted to me that he was fishing for the highest amount I would pay, and we finally agreed on $1,200 (which I later thought I should have made contingent on my review of the final product).

And with that, we were able to continue. Needless to say, this is not how I like to do business, and doubling my price without warning for no good reason just days before delivery for me is a huge red flag. I do plan to reach out to the folks who recommended him and give them a heads up. But I thought it best to reach a compromise I could live with as quickly as possible because, after all, they still had all of my materials and I needed to achieve my deadline. In my work as a construction project manager in Manhattan I’m used to working with contracts, and so without these, I’m counting on my experience to help me out here with smaller (and particularly specialty) vendors who typically do not, and are not used to having clients that are otherwise on task with deliveries and other communications. So in addition to due diligence, I’m finding that I have to practice making more savvy verbal agreements on the spot.

A couple of days later, it was time for me to pick up the finished cushions:

I was generally happy with the result; obviously some good work and experience went into the construction. My concerns with the finished product were that:

On the upside, the upholsterers offered to bring the foam from the original cushions to one of their distributors for recycling, saving me a significant amount of time and research and keeping with the spirit of my project. I’ll assume in good faith that this will be done, only because it’s someone they work with regularly. I left them with a handshake, satisfied that I’d got something significant completed but disappointed in the way it was transacted.

After a long drive back to NY, I took some time to remove the original Airstream furniture frames, vacuum the floors and clean the interior walls with water & bleach so that I could install the cushions against clean surfaces – it took about 5 hours. Now, it looks like this: 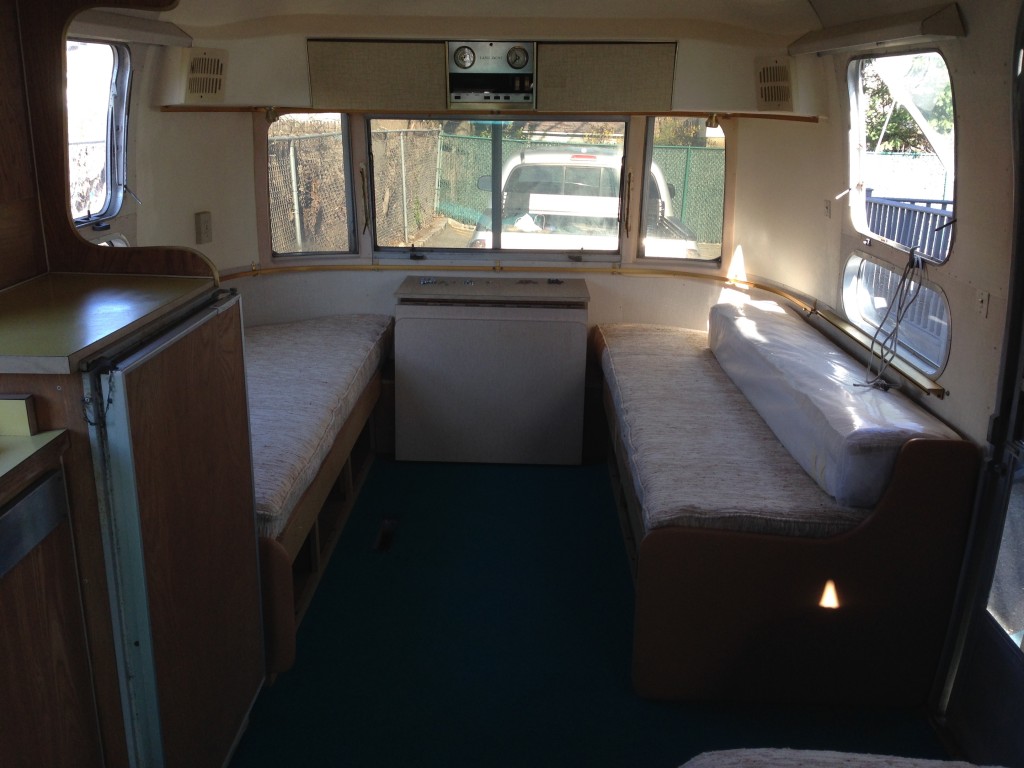 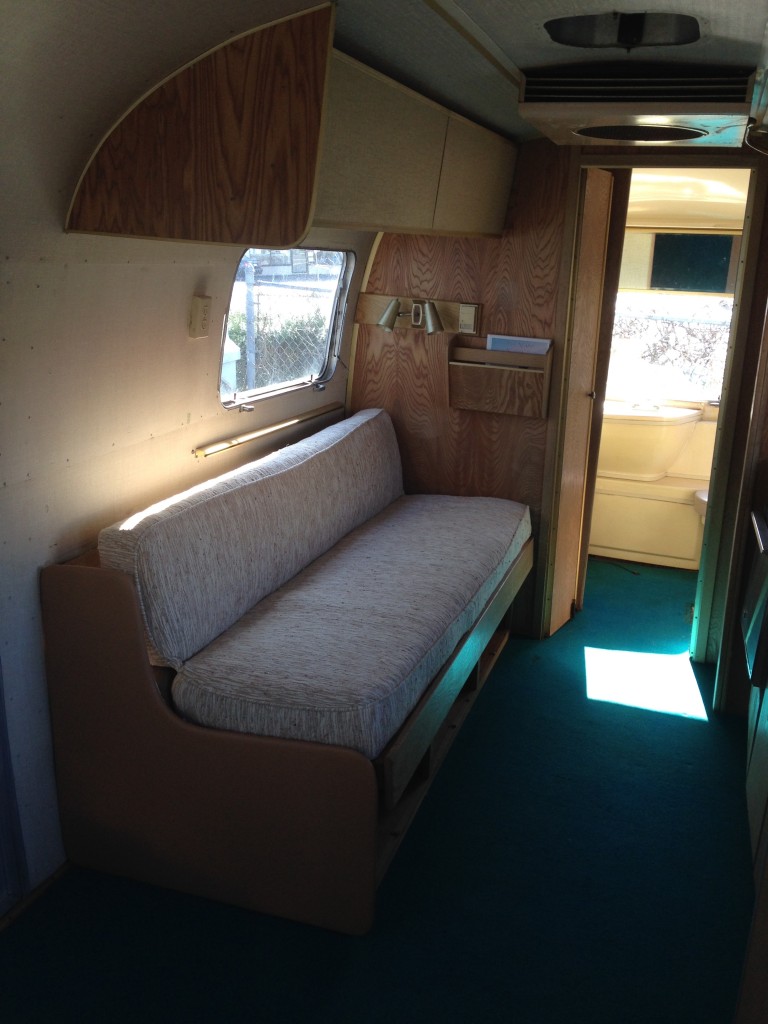 The gaucho hardware on the cushions don’t quite line up with the existing hardware on the wall, so I’ll need to figure that out. Still, it’s fine to sit & sleep on. At the end of the day, I’m happy with the materials, and that the cushions are useable in place. Lessons learned! The saga continues…

Up next: Welding the Frame