Back in the late summer of 2011, I was sure that it was time to move… west. It wasn’t a new thought; somewhere between the David Lee Roth videos and the Snoop Dogg videos of my formative years, I fixed it in my mind that the California lifestyle was the change I needed in my life. But as the oldest child, my parents wanted me to go to college close to home in New York, and as things played out, here I was, years later, still pining for a cross-country trip and a long-term move to the Sunshine State. It was time.

I needed a vehicle, my archetypal chariot with a hundred horses or two, for this hero to start the journey. So where does one find a chariot on a budget these days? Well, I started with eBay & a couple of local government auctions. I love to drive, and believe I do it well, but I know little about buying used cars. I thought that it would be cool to find something with a diesel engine to convert to bio-diesel, and with enough room in the back so that I could move my belongings, haul gear, and maybe convert to an mobile office at some point? I did a Google search and found a good used car-buying checklist and got a book from the library on basic car maintenance to get started.

Somewhere in my research, I found some images of a maintenance trailer that had been renovated by a landscape designer in Berkeley, CA., that I thought were inspiring. Sure, I liked the clean, simple, modern design, but even more so that it was made to take with you on a mission, and to carry your creative environment “on your back.” 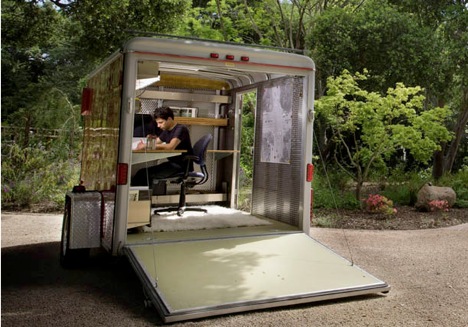 To make a long story short, I found more than a few really cool vehicles, but not many fit my constraints for size, budget, condition, style. I ended up looking most seriously at the Ford Escape (which didn’t have power enough to tow for my needs), and an oddity, the 1995 GMC Vandura Cutaway, which had been specially modified for the Air Force to be a personnel carrier. It is a diesel van, with the body of a box truck; but because it was made for personnel in active duty, it has additional windows, a rear heating unit, and a side door like a bread truck.

I loved it, pictured myself moving cross-country with it chugging on waste veggie oil from the local Chinese restaurant, and living in it for a few months on a side-street near a friend of mine in Santa Monica, while I got settled into my new life and went to school. Funny to think that that was my plan now, and as you’ve probably guessed, it didn’t quite play out like that.

I ended up looking at two of these rarities. The first one I lost at a government auction in (what was at the time) a last-second heartbreaker. As it turns out, the van got re-listed a week later because there was something seriously wrong with it that no one had picked up on. I passed on it the second time it went up for auction. In the meantime, I remembered that there was a listing for another van that I’d seen on eBay, that cost significantly more, but seemed to be in much better condition and had only 40,000 miles or so on it.

I booked a one-way ticket down to Georgia and met the seller, and we immediately drove to a local mechanic that I’d found online. The mechanic proceeded to give it a once over, and was concerned by a bit of black smoke that was coming from the exhaust. He called a friend in Texas who specializes on these engines, and I got a report back that it was advisable to steer clear of this van because of a known issue with the engine. I could expect to have to replace it within a certain number of years, and it would cost me about $4,500 to fix. I used the information from the mechanic as a bargaining chip and took a gamble. In the end I got the guy to take about four figures off of his asking price and hit the road with my new military van, feeling like a member of the A-Team.

I started to fantasize about how I’d renovate it. I pictured a desk that folded up to the wall, small shelving units for books and tools, interior walls padded like the inside of a service elevator, and with a nod the van’s previous service to the USAF, I’d have “Ground Force One” painted on the side.

I’d felt some knocking on the gas pedal a few times during my trip, but it always stopped, so I ignored it, figuring I had time to get it to a mechanic when I got home. Not so. After a few hours, I was just outside Washington, D.C., ready to stop and visit my brother, when suddenly a great plume of thick, black smoke blew out from the exhaust, and I lost the power steering. Smoke began pouring out from under the hood, and through vents into the cab of the van, so I quickly pulled it off to the side of the highway.

After a quick and pricey tow, and then a quick, pricey, and futile attempt by a local service station at bringing the engine back to life, GF1 was pronounced dead and I was presented with a bill for services rendered. Luckily, my brother lived only 20 minutes away, and the Bolt bus back to NY is cheap. I came back a week later and scrapped the van for $300, and decided it was a good idea to do some more research, lick my wounds, and try a different approach.