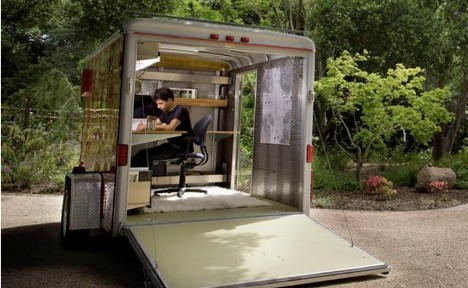 I looked a little further into Yestermorrow’s website to learn more about the instructors for classes I was interested in, and most intriguing for me (at that moment) was that one of them, designer Andreas Stavropoulos, was featured on the site for his Airstream project having been showcased in Dwell magazine. I did a quick Google search, and in an exciting coincidence, I realized that this designer was the same guy who had renovated the maintenance trailer that I had first admired a couple of months prior as an inspiration for my box-van idea!

This coincidence really helped me to feel that, after the still-raw disaster of ruining an expensive vehicle in a single day, I was still on the right track. I was starting to see that trailer-living and -working offered some interesting opportunities to learn and live adventurously… with the freedom of affordable independence. I wanted to find out more.

I quickly found a couple of videos about Andreas and his Airstream which got me really excited about the idea of renovating one for myself. This one, by a creative studio based in San Francisco called The Werehaus was my favorite:

Airstream Living from WEREHAUS on Vimeo.

One of the big takeaways for me from this video is that a project needs some strict constraints to give structure to the creativity. Otherwise, you’ll try to do everything that your imagination can come up with, and end up getting very little accomplished. For me, that was an important insight and one that I was able to explore later with him in class.

What I really like most about this video is that I can relate to the lifestyle and the design philosophy. Here’s a guy who found a simple way to work and live, practically and creatively, in a small space. He’s used the Airstream to save money and put himself through school, and designed into it the flexibility of work, living and recreational space. It was a project where he honed some basic skills with his own two hands, and gave himself design & budgetary constraints that kept it down to earth. Even after serving its initial purpose, it became a signature, portfolio piece that was featured in Dwell magazine. It’s a structure that promises freedom and continual inspiration before you even touch it… and through the renovation process, you’re personalizing an icon that in the end, you get to live in.

My kind of project!

Special thanks to Austin Chu at The Werehaus for permission to post the video!