One of the parts I was eager to see if I could have repaired on my 1969 Airstream was the original Armstrong brand air conditioner, built into the roof of the trailer. As usual, the question was whether it was more cost and energy efficient to repair something original or to replace it with something new. Offhand, my goal was to bring the original unit back to working condition rather than dump it in a landfill – but only if it made sense.

I did some research by asking contractors what they thought about my options, and also by looking at online forum threads on the subject:

Bottom line was that most contractors I spoke with (including residential air conditioner specialists, RV shops, and others) believed that it was not worth repairing because modern units are quieter and more efficient. Most contractors seemed disinclined to work on the older A/C either because it was on the roof of a trailer (a hassle), or because they wouldn’t make as much money as they would selling me a new A/C on top of the labor. I’d also have to consider the cost and be prepared for any complications related to removing the old unit and installing a new one as well. Also, if there was ever a freon leak, I was told that you wouldn’t be able to salvage a newer air conditioner – you’d just have to replace it.

On the other hand, a number of vintage Airstream owners pointed out that the original Armstrong air conditioner, although manufactured by a company that’s long been out of business, is a commercial-grade unit (read: built to last), and believe that it’s “the only RV AC worth saving and rebuilding.”

People buying vintage Airstreams might also pay more for one with an original, working A/C, so resale value might be a consideration for some. Also in favor of a repair was that I had two of these units: One on my Trade Wind, and one salvaged from a ’69 Airstream Safari. So maybe I could salvage parts from one and Frankenstein it all together.

In the end, I decided to try and have my my existing unit repaired. It took some persistence, but I lucked out and – through a technician that helped my father fix a wine cellar 20 years earlier – found a young, local A/C repairman named John Mangino of EKT HVAC to help. John told me later that the technician had just texted him a photo of the air conditioner itself and asked, “can you fix this?” without explaining that it was on top of a travel trailer! Fortunately, I’d lucked out yet again, and found someone else with an interest in repairing vintage machinery.

John came by after work one day in January, to take a look, run some tests, get an idea of what we were dealing with and then present me with options and pricing. 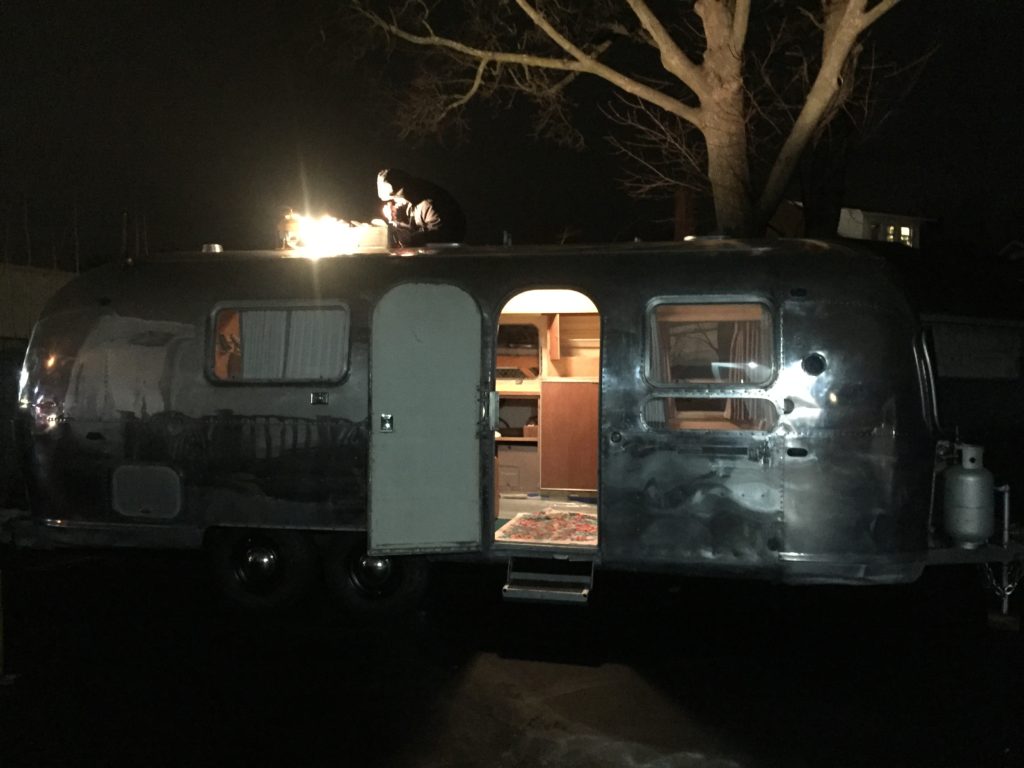 His diagnosis was that we’d need to replace the existing compressor, capacitors, fan motor and thermostat. We’d also change the type of freon in the system from the original R-22 to the more up-to-code and up-to-date, eco-friendly 427A option. According to the company’s website, the 427A is a “pure HFC refrigerant [with] zero ODP (Ozone Depletion Potential) and has also one of the lowest GWP (Global Warming Potential) among other retrofit solutions since its GWP is 2138.”

I was able to get some basic information about sourcing replacement parts (using the Air Forums links provided above) for John to use as reference in his own research. He gave me an estimate for the entire repair that amounted to less than the cost of a new A/C without labor, so I happily agreed and made a down payment for the work to get started. Then, while John located distributors & placed orders for parts with them, I worked on replacing the broken A/C shroud / cover that had nearly flown off of my trailer… I’ll talk about that in the next post.

Up next: Repairing a Vintage Airstream A/C (Part 2): Shroud Replacement